Home > Children & Ear Health > Discharge from the Ear or 'Otorrhea'

Discharge from the Ear or 'Otorrhea' 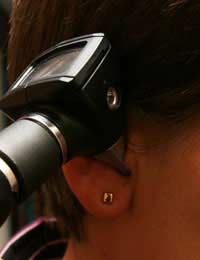 Normally occurring in childhood, otorrhea literally means discharge from the ear and is normally a term given to drainage of the outer and middle ear. The reasons for the drainage need to be explored to rule out any serious underlying problems.Otorrhea can be either acute or chronic. Acute otorrhea is recognised by being of a duration of three weeks or less, whereas chronic otorrhea is marked by lasting longer than six weeks. Those that fall within these parameters are said to be sub-acute.

There are many possible causes for this type of fluid to drain from the ear and thorough examination and discussion must take place in order to try and determine the cause. The most frequent cause of otorrhea is due to a prolonged and untreated ear infection caused by either over exposure and submersion in water (swimmer’s ear), after a common head cold or from a foreign body entering the ear, possibly from trying to clean inside the ear with an instrument.

There can be, however, much more serious causes such as a head or neck trauma, which may cause fluid from around the brain and spinal cord to leak out; this fluid is often colourless or straw coloured, if this is apparent seek medical advice immediately.Other potential causes of otorrhea include mastoiditis, cholesteatoma or tumours of the surrounding areas.

Acute otorrhea is usually initially treated by cleaning all of the infectious fluids from the ear area. This is usually done using suction equipment, followed by assessment of the ear to determine the source of the discharge. Washing the ear out using water or other fluids is not advised as this can cause pressure on the ear drum or force infection deeper into the ear if the ear drum is perforated.

Once the cause has been identified the treatment plan will vary depending on the cause of the leakage.Infections can be treated with anti-biotics either in eardrop form or as a tablet. Whilst the course is being taken, it is advisable to avoid submersion under water or when bathing as this can worsen the problem or make the ear drops ineffective.

As this condition is common in children, infections that have built up behind the eardrum will need draining, especially in chronic conditions and grommets may be recommended as a treatment option.Foreign bodies of the ear should be removed by a specialist under direct vision using the correct instruments. Once the object has been removed assessment of the area will be performed to determine whether anti-biotic therapy will be required also.

In the event of a more serious problem, such as head trauma or tumours direct referral to a specialist will be needed and treatment will be planned as per individual case depending on the cause and severity of the symptoms.

Otorrhea is normally a complaint present in childhood as a result of chronic ear infections and is normally not serious if treated correctly. In a few cases however, otorrhea can indicate a more serious condition that will need highly specialised medical input and treatment, therefore anyone suffering with otorrhea should seek medical advice to achieve an accurate and correct diagnosis.

Football Clubs for the Deaf
Share Your Story, Join the Discussion or Seek Advice..
[Add a Comment]
i have been suffering from otorrhea since very child hood. what should i do for its permanent cure...
alim - 11-Aug-12 @ 6:15 AM
I have a rattling in my ear and my head feels full of soggy cottonwood. I have had this for two months my dentist gave me antibiotic drops and then my doctor gave me tablets and a nasal spray. It is getting worse and I keep feling sick and occasional vomiting. I am now getting some pain around my ear and some dizziness. Thank you.
Budgie - 28-Jul-12 @ 2:44 PM
My grandson has what appears to be hyperacusis. Very highly sensitive hearing. What causes this and how can it be treated? he has had the condition for many years and is now 17.
Bill - 14-Jul-12 @ 9:53 AM
I was operated of ear (tympanoplasty)in mulago national referral hospital in Uganda, after three weeks a Dr examined me and foundgraft failure.am worried of what is going to happen next. Qn:will restore my hearing again ? Qn what to do next?
ponsent - 6-Jun-12 @ 12:00 PM
Title:
(never shown)
Firstname:
(never shown)
Surname:
(never shown)
Email:
(never shown)
Nickname:
(shown)
Comment:
Validate: