Home > Ask Our Experts > Can Ear Wax Be Removed by Vacuum?

Can Ear Wax Be Removed by Vacuum? 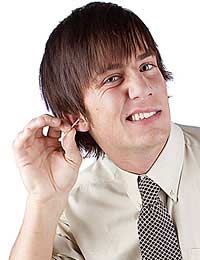 My husband has a problem with ear wax. He has had hearing aids for a few years now but doesn't wear them all the time so they have to be adjusted regularly.

Every time we go they say his ears are black with wax so we do the normal routine ear drops for 2 weeks and then see the nurse for them to be syringed and we always end up going back sometimes 3 times.

Is there somewhere or something else we can try? I have heard a suggestion that they can be vacuumed is this correct?

Ear wax removal using vacuums was developed from the old-fashioned method of ear candling; a practice that is not often seen in the UK anymore due to the potential dangers. It works be building up a negative pressure in the ear and encouraging the wax to be emitted due to the pressure ‘sucking’ it out.

Although it is true that there are devices available on the market that suggest the ear can be vacuumed free of wax that has built up, this practice is not really recommended by health professionals. The reason for this is because the devices usually involve sticking a probe or tube into your ear. The risks of doing this can be very detrimental to the health and function of your ears. Not only might it put you at risk of transmitting an infection, but there is also a risk of perforating the ear drum and causing trauma to the delicate structures.

The devices are often quite expensive with no guarantee of success so they are probably best avoided for use at home.

Some hospitals in other countries do offer to remove the built up ear wax using a vacuum device but this is only after they have been trained on the specific device and are competent at using it.

Unfortunately ear wax build-up is an on-going problem for hearing aid users and doctors recommend that this group of people have an appointment every 6 – 12 months to assess and treat any build-up. This treatment will probably consist of the type of syringing that your husband has already received but they may suggest ways in which you can soften the wax at home which aims to allow the ear to expel the wax before the need for syringing arises.

It may however be possible to swap the type of hearing aid used. There are now versions available that sit behind the ear instead of in the actual ear itself but these aren’t suitable for all users. Please speak to your GP or specialist for more information. Do not be tempted to buy one of the behind the ear aids before seeking advice because you may be wasting your money.

Has Flight in a Glider Affected My Ear?

I Feel Dizzy and My Ear Itches: What Does it Mean?

Is Non Allergic Rhinitis the Cause of my Problems?

Why do I Keep Getting Ear Pain?

What Are the Treatments for Autoimmune Ear Disease?
Share Your Story, Join the Discussion or Seek Advice..
[Add a Comment]
Vacuuming caused a 30% hearing loss. Don't allow it. Find a dr or audiologist who avoids it.
Jim - 11-Aug-17 @ 12:39 AM
I had an ear wax removal procedure done at the Loma Linda, Ca Va facility. When the tech was vacuuming out the wax in my right ear, he was apparently pulling out the eardrum along with the wax. The wax eventually let go and my eardrum snapped back causing what sounded like a firecracker going off inside my head. The botched procedure resulted in a collapsed eardrum and damage to my inner ear. I reported the problem, got another VA hearing test that showed a major deterioration to my hearing. The VA tried a few things to fix it, but none worked so now I have lost most of my hearing in both ears. The research I've done on vacuuming is always careful to say that the person doing the procedure must be very careful. Mine wasn't. So my advice on ear wax vacuuming would be to make sure your operator is well trained and is extremely careful. It has a potential to cause much more damage than the benefits achieved. I would never let anyone do the procedure on me or any of my family.
ron - 16-Jul-15 @ 5:36 AM
Yes the ENT that I go to in St. Peters, MO does uses a vacuum type device to remove wax and it has worked very well for me, but is rather expensive. Much less painful than disolving and digging the wax out.
Bryce_32 - 3-Jul-14 @ 5:06 AM
I have recently been refferd to have my ears vacumed at my local e.n.t department, had operations and hearing aids as a child so can't have then syringed due to scar tissue! have never heard of this method before but am excited to have it done! Can't wait to hear normally again! If anyone else has had this done would appreciate ur feedback on how it went and if it worked for you. thanks
steve_3000 - 7-Nov-12 @ 11:32 PM
Title:
(never shown)
Firstname:
(never shown)
Surname:
(never shown)
Email:
(never shown)
Nickname:
(shown)
Comment:
Validate: