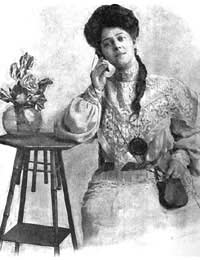 The hearing aids of today are technologically complex and sophisticated and help many people with moderate to severe hearing loss to amplify and distinguish sounds in the world around them. This can mean the difference between leading a normal, full life and social isolation. Although not everyone who needs a modern, state-of-the-art digital hearing aid gets one as readily as they should, the impact of hearing aids is one of the success stories of 21st century medicine.

The path from the early beginnings of hearing devices used before the late 19th century is an interesting one; developments in other areas have been important in pushing forward hearing aid evolution. Until the work of Alexander Graham Bell and Thomas Edison in the late 1800s and early 1900s, people whose hearing became impaired had only the option of an ear trumpet. Initially these were made from sea shells, as large, cone shaped shells that reduce down to a narrow point allow sound to be collected and funnelled into the ear. Synthetic cones attached to a tube and earpiece became available and allowed the user to move the cone around to pick up sound from different directions.

Alexander Graham Bell invented the technology that lead to the first telephones and was the first to amplify sound waves using electricity. Thomas Edison developed a transmitter made from carbon to convert sound waves to do the all-important conversion of sound energy to electrical energy. Without these inventions, which were aimed at producing early telephones, electronic hearing aids would have been impossible. When the new technology became known, hearing aid inventors saw its potential and started to develop the first electronic hearing aids in the last decade of the 19th century

The first electronic hearing aids that became available for sale in the USA and German in the 1890s were made by several companies. They all had their own individual designs but they had one characteristic in common – they were huge and incredibly expensive. One developed by Miller Reese Hutchinson, widely recognised today as being very important in hearing aid history. His first commercial hearing aid, produced by the Akouphone company in 1899, cost $400 – an enormous sum for the time. It wasn’t exactly mobile either – the user could only amplify sounds when sitting next to the large table required to take the machine.

Size continued to be a major hindrance to the practicality of hearing aids until vacuum tubes became available in the 1920s and then transistors were developed in the 1950s. This meant that the technology to amplify sound and to power the hearing aid both got much, much smaller, and the first hearing aid that could be fixed onto spectacle frames cost $230 in 1952. This was a bit improvement on price from the Akouphone hearing aid, even when the inflation rate in the intervening 50 years is not taken into account.

Refinements in design and usability continued to be made during the next 40 years but the hearing aid had to wait this long before the next major advance in technology that allowed it to move forward in a huge leap. When digital and computer technology really took off in the 1980s and 1990s, hearing aids were developed that could enhance sound and speech very accurately, and could be placed inside the ear canal, becoming completely invisible. This improved the efficiency of the hearing aid and also its acceptability. Older people hate having a device on the top of their ear that signals to the world that they are hard of hearing and some would rather no wear the aid to some social occasions.

The most sophisticated hearing aids of today have systems of digital audio processors that can refine the amplification of speech, enabling the user to pick out words in a conversation held where there is considerable background noise. This filtering makes it possible to listen to what the person next to you is saying while at a football match, for example.

Cochlear implants are also now available – this ultimate hearing aid development can enable someone who is profoundly deaf to pick up sound signals from the outside world and process them to be able to ‘hear’. It may be that implantable hearing aids are the future, with work ongoing to develop smaller devices that can be continually fine tuned to enhance the user’s hearing, when implanted in the skin behind the ear.