Home > Common Ear Conditions > Dizziness: Is it Caused by a Virus? 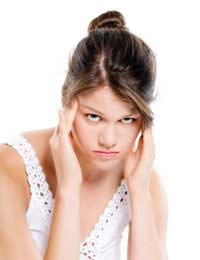 If you have flu or another viral infection it is common to feel dizzy, ill and sick. Viral infections are a common cause of dizziness and vertigo, because the infection can affect the nerves and other structures in the inner ear.

The part of the inner ear that helps with balance is called the vestibular apparatus and if a viral infection penetrates this, the brain can become confused. The information it is getting from the inner ear does not match up with the messages from the eyes and the rest of the body, and the typical sensation of the world spinning around, or lurching around takes over.

Why Do Viral Infections Lead to Dizziness?

Viral infections often cause the labyrinth, the system of fluid filled canals that form part of the vestibular apparatus, to become inflamed. This condition is known as viral labyrinthitis and it can occur as a result of an ordinary cold, flu or a viral infection such as chicken pox or shingles. It is common for the dizziness to be severe, and to be accompanied by vertigo. This is the sensation that you are going to tip or fall over when standing up and the sensation can make you nauseous and sick. It can only be relieved by lying still, and in particular, keeping the head still.

Dizziness can also be caused by a viral infection that causes inflammation of the vestibular nerve, which is not actually inside the inner ear. The results are much the same – the brain is confused and signals from the ear become mismatched.

How Long Does Viral Dizziness Last?

Both forms of inner ear inflammation are usually temporary and ease within a few days. Rarely, they can take weeks to resolve and constant dizziness and vertigo can become very debilitating and distressing. The different times needed for recovery depend on how extensive and serious the nerve damage is. Nerves in the vestibular apparatus that are damaged in this way never recover; the brain compensates for their loss by developing new sensory and recognition pathways.

If symptoms do not go away of their own accord, it may be necessary to have a full investigation to make sure that some other underlying illness, such as Meniere’s disease, is not responsible. This is a condition that results from an excess of fluid in the labyrinth; it is not related to infection, but can be made worse by the inflammation as more fluid enters the labyrinth. An audiogram can show whether there is inflammation in either the labyrinth or the vestibular nerve, and it can reveal whether Meniere’s disease is present.

People with recurrent symptoms of dizziness following every cold or minor viral infection could have unrecognised Meniere’s disease – if this is treated, future ‘attacks’ can be reduced in intensity, if not avoided altogether.