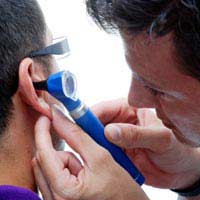 Glomus tumours are (sometimes cancerous) growths that start in nerves associated with the jugular vein, one of the main veins that takes blood away from the brain. They can arise anywhere in the side of the face or throat but are slow growing and do not often spread to other sites in the body. Glomus tumours that develop in the nerves associated with the ear can cause damage to the inner ear, leading to hearing impairment, deafness and dizziness.

The head of a human being is a congested place, crammed with major nerves, large blood vessels, bones, and muscles, all supporting and protecting the brain, three of the main sense organs, and the entrance to the airways and digestive system.

Glomus tumours can develop in the nerves that monitor what is happening to the blood in the jugular vein. Specialised receptors called chemoreceptors keep a close watch on levels of oxygen, carbon dioxide and other blood components as the blood passes out of the brain through the jugular vein.

The large glomus bodies are the main chemoreceptors that monitor the blood in the jugular vein at the jugular foramen, the point where the jugular vein exits the skull at the temple. Smaller glomus bodies occur along the nerves in the face and those that are close to the middle ear. Normally, these groups of specialised nerves cells grow and expand through childhood and into adulthood and then stop at around the age of 40.

In some people, however, the glomus bodies carry on growing and some of the cells start to divide out of control, forming a cancerous tumour. Glomus tumours, also called paragangliomas can develop alongside the jugular vein, near to the carotid artery as it enters the head from the neck, in the inner ear, at the back of the nose, or in the trachea (the windpipe) or larynx (the voice box).

Glomus tumours are classified as low grade brain tumours or low grade head and neck tumours. In a very few people, a genetic condition such as Li-Fraumeni syndrome may increase the risk of all types of tumour, and may be a factor. In others, exposure to radiotherapy or a carcinogenic chemical can be an explanation. Usually, in the vast majority of people who develop a glomus tumour, a definite cause cannot be identified.

Most people are completely unaware that they have a glomus tumour until they experience pulsatile tinnitus. This is one of the main symptoms of a glomus tumour. It is caused by the cancerous mass pressing on the bones of the inner ear. The pulsing sound is caused by the blood moving around the tumour as the heart beats. As the glomus tumour also fills the ear canal, it is also common to experience loss of hearing, complete deafness and vertigo (severe dizziness).

If the glomus tumour has grown and is affecting other parts of the head or neck, some people can start to become hoarse, finding it difficult to speak properly and to swallow. If the tumour grows on nerves in the face, this can lead to numbness or paralysis. Spells of dizziness and headaches are also common, but on their own are not defining symptoms of glomus tumours as they can also be caused by many other underlying illnesses.

How Common are Glomus Tumours?

Fortunately glomus tumours are very rare, affecting only one person in every 1.3 million. Glomus tumours are three times more common in men than women, for reasons we do not understand, and usually occur between the ages of 40–70 years.

Glomus tumours of the middle ear can usually be seen by an examination of the ear with an auroscope. Imaging studies such as CT scans and MRI scans are then used to assess the extent of the tumour inside the head. Angiography, where contrast is injected into the tumour’s blood supply, is also routinely used to assess glomus tumours.

Once a diagnosis has been made, the main treatment is surgery to remove the glomus tumour. An embolisation technique is often used day before surgery to make it more likely that the whole tumour will be removed in the operation. During embolisation tiny particles are injected into the tumour to block its blood supply. Embolisation allows complete removal of the tumour to be achieved in 90% of patients. If the tumour has grown large, or has started to spread to nearby tissues, radiotherapy is then used as a follow up after surgery.

Treatment of glomus tumours is generally very successful. Some people can be left with some symptoms such as hearing loss depending on the extent of their tumour, but 77% remain symptom-free 20 years after treatment.