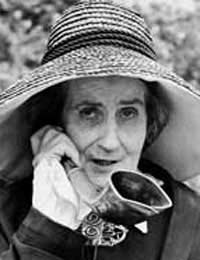 Ear trumpets were an early form of hearing aid, before the development on devices that can amplify sound by converting sound waves to electrical signals and then transferring them into the ear. Ear trumpets have been used for hundreds, if not thousands of years; the earliest were the large conical sea shells that people picked from beaches, then realised that when held to the ear using the pointed end, they could make sounds seem louder.

During the Victorian period, ear trumpets became rather fashionable and antique examples are still available, made from intricately carved bone and even silver. At the end of the 19th century, more modern ear trumpets had appeared; the cone that fitted into the ear was fitted instead into a tube and a finer ear piece was attached to the other end of the tube. This enabled the person using the ear trumpet to move it around more freely, getting more directional amplification of sound.

In the normal ear, sound waves come towards the ear from all directions. The pinna, the fleshy part that we normally describe as the ear, is shaped to concentrate the sound waves towards the ear canal. Once sound waves travel into this narrow channel, they then reach the ear drum, causing it to vibrate. These vibrations are transferred deep within the ear and cells in the inner ear, inside the cochlea, convert the vibrations into electrical impulses that pass along the auditory nerve to the brain for processing.

Ear trumpets all work in the same way; they are a better version of the pinna. The conical shape collects sound waves and concentrates them to the narrow point. If this is inside the ear, more sound waves hit the ear drum and someone whose hearing is starting to fail gets more sound vibrations, so is more likely to stimulate the hair cells in the cochlea to fire and send signals to the auditory processing centres in the brain.

Do People Still use Ear Trumpets?

Not for a serious method of coping with hearing loss. Today, people do use some forms of ear trumpet – a string telephone made by children in nursery school, in which two plastic cups are used to make a play telephone works on the same principle as an ear trumpet but is meant to be about fun, play and learning. People often make their own ear trumpets by cupping their hands over their ear when they haven’t heard what someone else has said and some older people might like to use antique ear trumpets for a dramatic effect.

Today, the modern digital hearing aids are tiny and undetectable as they are worn inside the ear canal. Cochlear implants and other implantable devices to allow the profoundly deaf to detect sounds are also developing rapidly. People with hearing loss today have many options to increase their hearing capacity significantly using modern technology and the ear trumpet, although it played an important part in the history of hearing aids, has definitely had its day.