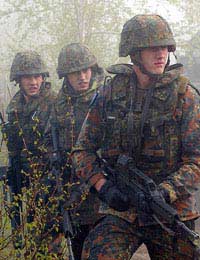 It is hard to imagine what it must be like to be in the middle of a battle in somewhere like Afghanistan. The soldiers who are there need to be on full alert at all times and can be in tense situations that are also very noisy. Not only are there aircraft flying overhead, sniper fire coming from all directions, but human noise also adds to the mix. Civilians are likely to be screaming and other soldiers, particularly those in charge, tend to shout all the time, so it’s little wonder that soldiers find it hard to decipher exactly where sniper fire is coming from.

To help soldiers worry less about hearing everything in battle, a new technological development is currently being trialled by soldiers in the German, Dutch, Polish, Indian, Australian and New Zealand armies. The device needs to be thoroughly tested in controlled conditions before it could be used in real battle situations.

Developed by a company in the Netherlands, the battle microphone is able to separate out the different sounds and detect exactly which direction sniper fire is coming from. It can also pick up the sound vibrations from an aircraft overhead and relay the information to the soldier about its precise make, model and origin.

How Does the Battle Microphone Work?

Sound is basically air vibrations, which travel through the air as sound waves. In the human ear drum, these vibrations are picked up and transmitted through the inner ear to receptor cells in the hairs inside the cochlea. These convert the vibrations into electrical signals to go to the brain for processing.

The battle microphone works in a completely different way. The microphone contains strips of the precious metal platinum that are incredibly thin – their width is only about 600 platinum atoms and they are only 10 micrometres across. Strips of ultra thin platinum are arranged inside the microphone in many different directions and they pick up the movement of air molecules that go past them. This causes differential cooling in the strips (which are superheated to 200 degrees Celsius when in use) at rates that depend on the direction and speed of the air flow. The strips relay this information to a computer which puts the information together to give an exact position for the origin of the sound in terms of three dimensional coordinates.

The term microphone is normally used to describe something handheld but this new battle microphone is only the size of a match head and researchers are looking at the possibilities of incorporating it into the inside of the helmet of soldiers going into battle, or as part of their communication gear. Thinking more futuristically, it may be possible to semi implant the device just under the skin so that it can never get lost.

In reality, the battle microphone is known more properly as an acoustic vector sensor and it could have a range of other applications for use in the battle field, in military situations and in the outside world. As the device can pinpoint the position of sounds, it could also be useful in air traffic control, particularly when visibility is affected. In an emergency landing in a fog bound airport it could prove a life saver. There are also plans to do field trials for bomb and terrorist detection as it can detect even the slightest sound from a parked car or group of parked vehicles, such as the ticking of a bomb timer. This could enable bomb disposal experts to be more confident that a vehicle is suspicious before they either destroy it unnecessarily, or go nearer to investigate with disastrous results.

How Can I Check My Hearing?
Share Your Story, Join the Discussion or Seek Advice..
Hello,Is there any possibility I could get direct contact numbers of any specialist that deals with Hyperacusis patients? I am extremely sensitive to noise and I need emergency medical help.Thanks.
Lenny - 15-May-12 @ 4:14 PM
Title:
(never shown)
Firstname:
(never shown)
Surname:
(never shown)
Email:
(never shown)
Nickname:
(shown)
Comment:
Validate: