Home > Case Studies > I Don't Hear as Well as I Used To: A Case Study

I Don't Hear as Well as I Used To: A Case Study 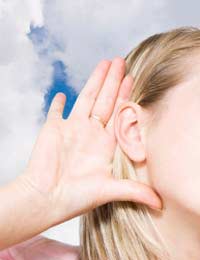 Flora is now in her early 70s and is very active, going to pottery and painting classes twice a week and a keen walker with her local rambling group. “I can still manage about three miles and I think you need to keep going and make the most out of life. I don’t want to be old and sitting in a chair,” she laughs.

For the last two years, Flora’s spirit has been a bit dampened, however, because her hearing is not quite what it used to be. “I have been very lucky in life – I have always had excellent health, only needed reading glasses from my early 50s and have kept fit, I’ve eaten well and kept my brain very active. It was a shock when I realised that, for no apparent reason other than age, my hearing was deteriorating,” she explains.

The first sign of anything wrong was when Flora noticed she was having difficulty hearing what the other person was saying when she was on the phone. “My sister lives about 120 miles away and we do meet up about once a month but we like to keep in touch in between and generally phone each other every day. I thought there was something wrong with the phone at first and I went out and bought a new one – one of those slim line black digital ones. That didn’t seem to work any better and I exchanged it twice before light began to dawn that it wasn’t the phone at all – I had a hearing problem,” she says.

Flora’s son recommended that she take one of the online hearing tests and next time she was over there with him and his family for Sunday lunch, he took her up to the computer and she did the test. “It showed that I had a definite problem in my right ear – which was useful to know in itself as I then switched to using the phone in my left ear and immediately noticed a big improvement in the quality of my conversations,” she grins.

After a few months, long after Flora had promised her son that she would go and see her GP and get a proper hearing assessment done by a professional audiologist, Flora noticed that the hearing in her left ear was also getting worse. “I had to make an appointment and I dreaded hearing the worst – maybe I had a brain tumour, or some awful problem that was going to result in me being completely deaf. I was really worried that this would put a limit on my independence,” says Flora.

A few weeks later, the appointment with the audiologist came through and Flora went with some trepidation. “The test was very thorough – much better than the online hearing test, which you would expect – and the consultant also examined my ears carefully. The good news was that I then had to have my ears syringed – yes I did have an underlying hearing problem but the build up of wax was certainly not helping.” No matter how good your hearing is generally when you are young, it is common to suffer some hearing loss as you get older. Hearing tests, ear wax treatment and hearing aids can all help.

After the removal of ear wax, Flora had a repeat test and this assessment included finding out if her hearing could be improved with a hearing aid. “I was quite impressed with that – the hearing aids I had imagined were really big and old fashioned but I now have a small one that fits inside the ear canal and it’s fantastic. I never forget to put it in because it’s one of the things that helps me to lead the life I want,” she says.