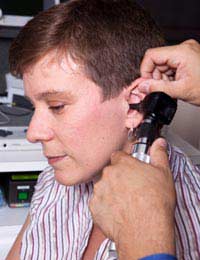 Many types of deafness and hearing loss have nothing to do with genetics. Anyone can sustain hearing loss after being exposed to an extremely loud noise, because of an accident or injury, or because of long-term exposure to noise above the recommended levels. Other types of deafness are solely down to genetics. Around 750 children are born each year with profound sensorineural deafness because of gene mutations. Some of these have been found recently. In other people, genetics may play some role, maybe making them more sensitive to hearing damage through exposure to noise that other people can cope with easily without it affecting their hearing. Finding the genes responsible in this case is far more difficult.

Around half of the children born each year with profound congenital deafness have a definite gene mutation that has caused their condition. One gene identified is the PTPRQ gene. This has been researched after it was implicated as the cause of inherited deafness in several affected families. The advent of DNA technology has made further work on these families possible and has confirmed this gene as having a definite association with profound deafness. The work has also enabled researchers to identify two more genes that also cause deafness.

The three genes are different but encode proteins that play an important role in the process that leads to development of the hair cells in the cochlea of the ear. These tiny hair cells line the cochlea and the ear canal, where they sway about in the fluid picking up every tiny vibration. The hair cells are sensory receptors that link to other cells that transfer this information into electrical nerve signals that then go to the brain where they are perceived as sounds. Damage to a large number of hair cells, such as by taking a drug that destroys them, can lead to deafness. In children born with profound deafness, with mutations in any one of these three genes, the hair cells fail to develop. After birth, nothing can really be done to stimulate them to develop, so the neural pathways that would allow hearing are never made.

Now that some of the genes responsible for congenital deafness have been found it is very possible to develop tests to be able to screen parents to see if they are likely to have a child affected in this way. Developing such a test may be technically straightforward but it is ethically quite complicated. Deafness as a disability does not stop a child or adult leading a full, active, productive and enjoyable life and many people question whether it is right to develop tests that might lead some parents to abort foetuses who may be born deaf.

Others argue that parents have the right to choose and some people would not want to have a deaf child. It is a difficult problem to argue that people should be forced to have a child that they do not want, or to prevent the research that develops a test to show whether parents are carriers of one of the genes for deafness.

Parents who already have one child born profoundly deaf are also divided on the issue. They know that they stand a much greater chance of having other children who will also be deaf, and there is much discussion about whether to offer pre-implantation diagnosis to them. This technique is done as part of an in vitro fertilisation treatment. The conception takes place outside the mother’s body and the embryos are tested to see if they carry any of the deafness genes. Only foetuses that don’t would then be implanted to bring about a potential pregnancy.

The policy of the NDCS is against limiting choice for parents and individuals but it does stress that deaf children can live happy and fulfilled lives and can attain and achieve the same level of abilities in many areas of life as children who can hear well. Parents or prospective parents facing this issue may find it useful to have detailed genetic counselling to help them reach a difficult decision.