Hearing Problems in Children Due to CMV Infection 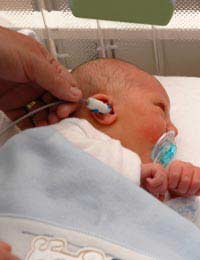 Most people know that some infections are dangerous for pregnant women – German measles and toxoplasmosis, for example. Both infections, one viral and one parasitic, can be passed on to the foetus. Another infection in pregnancy that can cause severe congenital problems, including hearing impairment, is cytomegalovirus infection. People seem to be less aware of this but it affects between 1 and 4 per cent of all pregnancies. This may not seem like many but that amounts to thousands of babies affected each year.

What are the Symptoms of Cytomegalovirus Infection?

One of the main problems with CMV is that it causes few symptoms in the mum-to-be. She may feel off-colour, more tired than usual, have some aches and pains, a bit like mild flu. The trouble is that most pregnant women feel like this at some time or another, so the infection generally goes unnoticed. The virus that causes the infection passes across the placenta and has a much more devastating effect on the growing baby, which has no immunity and no way to fight off the virus. Once the baby is born, again, there are no obvious signs of symptoms so if the original infection in the mother was unrecognised, no alarm bells ring.

Unfortunately, the damage the CMV does in the foetus involves the nervous system and as the baby starts to grow and develop, it becomes obvious that there are serious health problems. Babies with congenital cytomegalovirus syndrome tend to have problems with their liver and spleen and fail to develop normally. They often have problems with physical coordination and mental impairment, including damaged hearing. The earlier the symptoms and the worse they are, the more likely the child is to develop significant hearing loss in the first few years of life. That hearing loss is then progressive, and some children with CMV syndrome do become profoundly deaf.

If a child appears to have problems with hearing at a very early age, and there is no obvious genetic cause, the next most common cause of hearing loss is CMV infection, so most doctors will recommend a test. Some doctors in America have even suggested that this test could be done with all babies before the age of 6 weeks. A simple urine test can indicate if CMV is likely, and then confirmation can be obtained with a spot blood test, which is very quick to do and non-invasive. If a baby is diagnosed early, treatment with an oral anti-viral drug can help clear up the infection and limit the damage to the neurons involved in hearing, so preventing much of the hearing loss that could develop later.

Who is at Risk of CMV Infection?

We all are – it is a very common virus. Most people get it as children and become immune to it and 90% of adults are immune. The problem arises in the other 10% - and it is a matter of chance for a woman who has never caught CMV before to do so when pregnant. Preventing infection involves taking precautions over hygiene – such as washing hands after visiting public lavatories, which should be normal practice anyway – and taking special care if looking after children who aren’t your own. A pregnant woman who decides to help out at a playgroup or with a friend who has children needs to be careful to always wash her hands after helping a child to the toilet, or after changing a nappy.

Is there a Vaccine to CMV?

Not as yet, but trials are in progress of a new vaccine that could be given to women at around puberty, to prevent them getting the infection during their childbearing years. It is currently in late stage clinical trials and, if these prove successful, a vaccine could be approved within the next 3-5 years.